What is a pradakshina around the Arunachala in Tiruvannamalai? - Madhukar - Enlighten Life

What is a pradakshina around the Arunachala in Tiruvannamalai?

What is your motivation to be in a 3-week silent retreat in India?

Blog Carnival for the Birthday of Papaji H.W.L. Poonja

What is a pradakshina around the Arunachala in Tiruvannamalai? 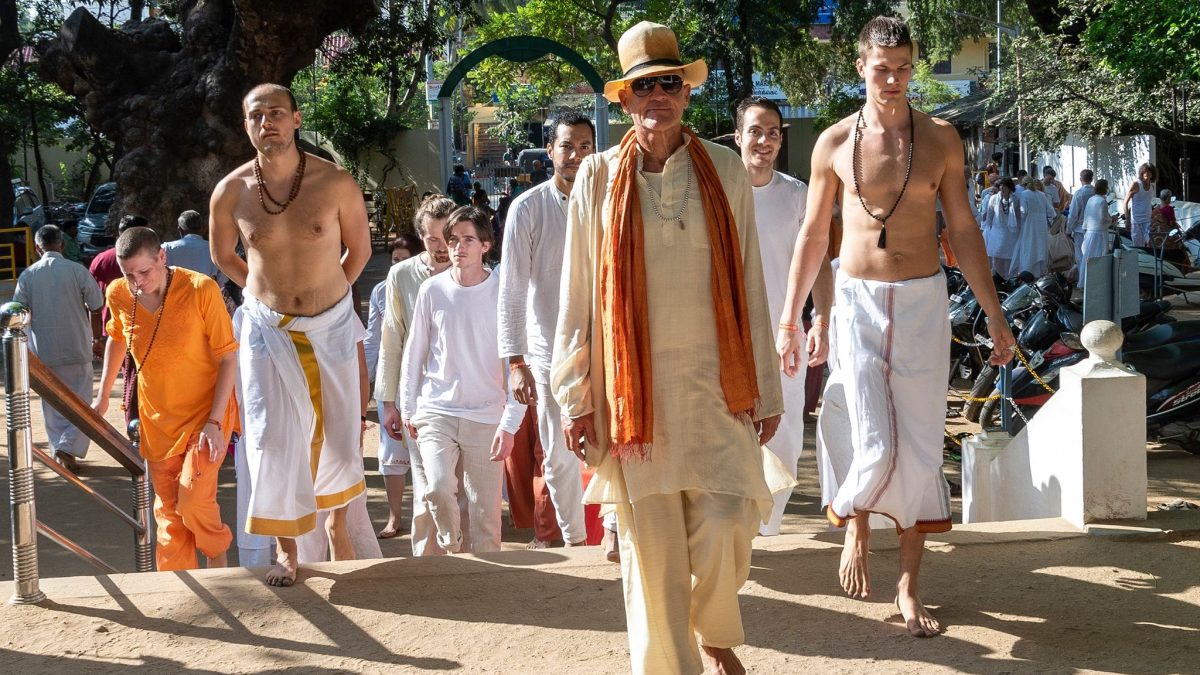 Pilgrimage is modern. Have you ever asked yourself: What is a Pradakshina? The term comes from Sanskrit and it refers to a circumambulation of the sacred mountain Arunachala in Tiruvannamalai. Read about what it’s all about here. You’ll probably come across this term again and again as you browse this website or Madhukar Enlighten Life’s YouTube channel, because a Pradakshina is part of the three-week silent retreat held once a year in southern India.

The Pradakshina is a pilgrimage

The sacred mountain of Arunachala is in India in the small town of Tiruvannamalai in the state of Tamil Nadu. It is said that people have been making pilgrimages here since the times of the Rigveda. The Rigvega is the oldest part of the Vedas – which means this is a very ancient pilgrimage site. Before I give you the answer to the question: What is a Pradakshina, I would like to take you to India first.

The pilgrimage town of Tiruvannamalai 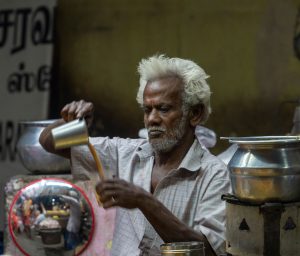 One of the chai stores in Tiruvannamalai

But let’s stay in the present. Let me take you to this bustling city in the south of India. The best way is to get into a rickshaw. We sit on the back seat of a small motorized vehicle. The driver has already asked us where to go. “Take us to Ramana Ashram”. We negotiate the price and off we go. Although it is warm in January or February, we are both glad to have a scarf on. In case there are smells that are unpleasant, we can pull it over our noses. And the driving wind is not to be underestimated either. We pass trucks, cars, many other rickshaws, bicycles, bullock carts, and many, many people on foot.

Some are carrying something on their heads, they are on their way to the market. Others are walking in rapture or at least with a clear orientation of their way. These are already the pilgrims – most of the time you can recognize them. The pilgrim’s path goes a bit through the middle of the city. The city is bustling. We pass the big temple, many stores, restaurants, chaishops and a cinema. The rules on the street are different than in Europe. It always seems to me that someone dictates where the traffic goes – and then it’s just a matter of flowing along. I then also imagine that the Indians live devotionally on the street as well. They are no longer an individual, but simply flow along with the flow of traffic.

Our view is sometimes obscured by a larger building, but we otherwise always see it – the sacred mountain Arunachala. It is said to be a manifestation of Shiva, the supreme deity of Hinduism. This mountain is also the magical attraction that draws the many pilgrims to the city. The mountain attracts people from all over the world to Tiru – as the city of Tiruvannamalai is often abbreviated. Arunachala also once drew Sri Ramana Maharshi here – he often said the mountain was his guru. At the Pradakshina, the mountain plays the main role.  Then let’s go back to the pilgrimage.

What is a pradakshina?

More about the Pradakshina

The circumambulation of Arunachala is called Pradakshina or Parikrama in Sanskrit. In Tamil, the circumambulation is called Girivalam and is one of the most important ways to worship Shiva. It is both sadhana (practice) and seva (service). I realize just in writing that my explanation of pradakshina keeps raising more questions, there are still more words in Sanskrit. Yes, I’ll explain all of them. I think I’ll write a Sanskrit glossary for that. Since the mountain is equal to the guru, he is Sat – Truth and so the circumambulation is Satsang. There are also a few rules: The circumambulation is always clockwise. Traditionally we go barefoot and of course we are aware that we are circumambulating the Divine. Before we start, we take some of the sacred earth from the road with our right hand and put it on our forehead, on the forehead chakra. What that means, I don’t know. I just used to imitate it, Madhukar showed it to us like this. We keep silent on the way or chant a mantra dedicated to Shiva respectively Arunachala.

From the Ramana Ashram, we now start walking. We start our 14 km walk and go clockwise. On certain days we don’t even need any orientation for this – we find our way simply by diving into the crowd. This is for example the case at full moon – or at Sivaratri. On these occasions there are many more pilgrims in the city. On Sivaratri you should even have a room already reserved – otherwise you won’t get one. The city is crowded. We walk our way in the shade of the big Algharoba trees. To our right and left, vendors sell water, chai, lemonade, food. There are stalls playing music and selling CDs – sacred chants. People are taking a break, sitting on a bench, their eyes fixed on Arunachala.

The mountain changes shape – it has different faces as we walk around it. From one point, it even looks like a reclining Buddha. Have you ever seen that before? At some point we leave the city and already the other end of Tiru is waiting for us again. We walk along the street lined with stores and restaurants. Finally we reach the center of the city – we are in front of the big temple. From here we walk past the marketplace a bit along a side street – to escape the traffic on the main street. It is not far when we rejoin the main street there – then we are already back where we started our Pradakshina – at the Ramana Ashram. There we go through the gate, leave our shoes next to the entrance – there is a special place for that (you won’t miss it, because there are the shoes of everyone who enters the ashram).

Then we go inside and sit there in silence for a while. This completes the Pradakshina wonderfully. If you have never experienced such a pilgrimage, never done a Pradakshina – I may give you something to take with you. Please pay attention to what this circumambulation does to you. How do you feel after your circumambulation? How do you feel when you sit in silence in the ashram later? I have written here how it is done, but what is more important is what happens. And that is another story.

Do you have a wish – now is your opportunity! 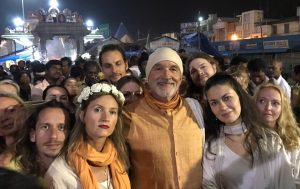 Ahja, one thing I almost forgot. Many people go around the mountain because they have a wish. If you make a wish at the Pradakshina, it is said that it will come true. That’s what Madhukar was referring to in this video as well. Madhukar speaks English and you can also read here what he said then. So remember the Pradakshina – and choose wisely what you wish for.

On the way we meet again and again people who have a cloth bag around their neck. It bears the inscription, “O Arunachala, you root out the ego of those who think of you in the heart as “Arunachala”‘.” This is one of the verses from a poem of Ramana Maharshi and this verse adorns the bag in which you can put the books that you can buy in the bookstore that belongs to Ramana Ashram.

If you feel like experiencing a Pradakshina now, come to the three-week silent retreat held at Tiru. The last two years, 2021 and 2022, the Tiru retreat, the silent retreat, was held online and did not last three weeks. In 2023 you can be there again – three weeks at the foot of Arunachala in silence. And we’ll certainly do at least one Pradakshina there again during the retreat. And that is a completely different experience. See here for more information about it (click). 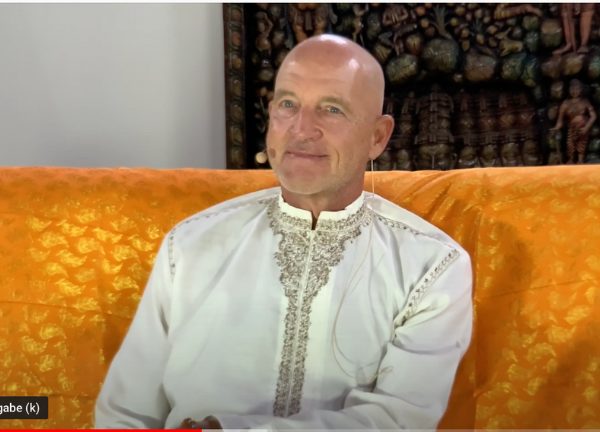 What is your motivation to be in a 3-week silent retreat in India? 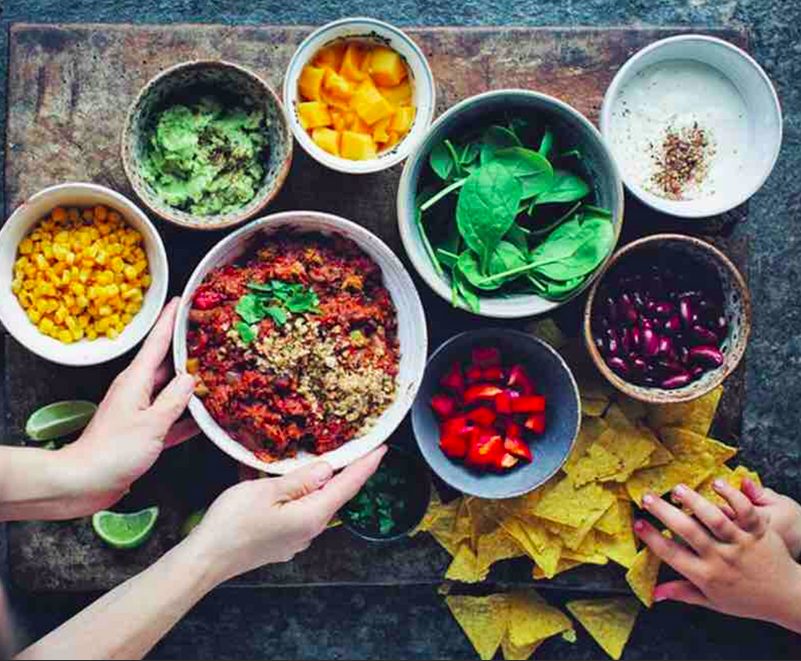 Travel to India – health advice for participating in a retreat

Even in times of my greatest arrogance I knew that

Sunday afternoon on the beach

Thank you for your order!

How did you hear about this retreat/event?